How to get to the Faculty

Located at Allameh Tabataba'i University's central campus, the Faculty of Management and Accounting (MA) is based in Tehran's Dehkade-ye Olampik neighbourhood. The sections below help you find the easiest way to get to the Faculty.

If you are visiting MA from outside Iran

If you visit our campus from outside Iran, your first point of contact within Iran will be the Imam Khomeini International Airport (IKIA). Being so large an airport that it is entitled the "Imam Khomeini Airport City", the IKIA provides you with different local transport means. In what follows, helpful information is provided on the available transport options for you to get to the MA.

Due to the far distance between the IKIA and the campus, we suggest you choose the Airport Taxi as your first choice. There are, of course, other means, including the Metro, to use, but as the Metro in this direction is a bit too long, the taxi is more preferred. It usually takes about an hour to move to the MA from the IKIA by taxi.

According to the IKIA website, the IKIA taxi service works 24/7 and provides passengers with insurance, safety, and a comfortable trip to all parts of Tehran.

Like many other international airport taxi services, the IKIA Taxi is also available for rent. More detailed information about this service is available on the IKIA Website.

Tehran is equipped with an extensive underground/subway railway system, commonly known as the "Metro". To date, Tehran Metro contains seven active lines, involving more than 135 active stations. Fortunately, there are metro stations in both the airports of Tehran. Therefore, the Metro is suggested as the fastest and safest public transport means to move to the city centre.

You can click on the image below to download the high-resolution English version of the Tehran Metro Map. 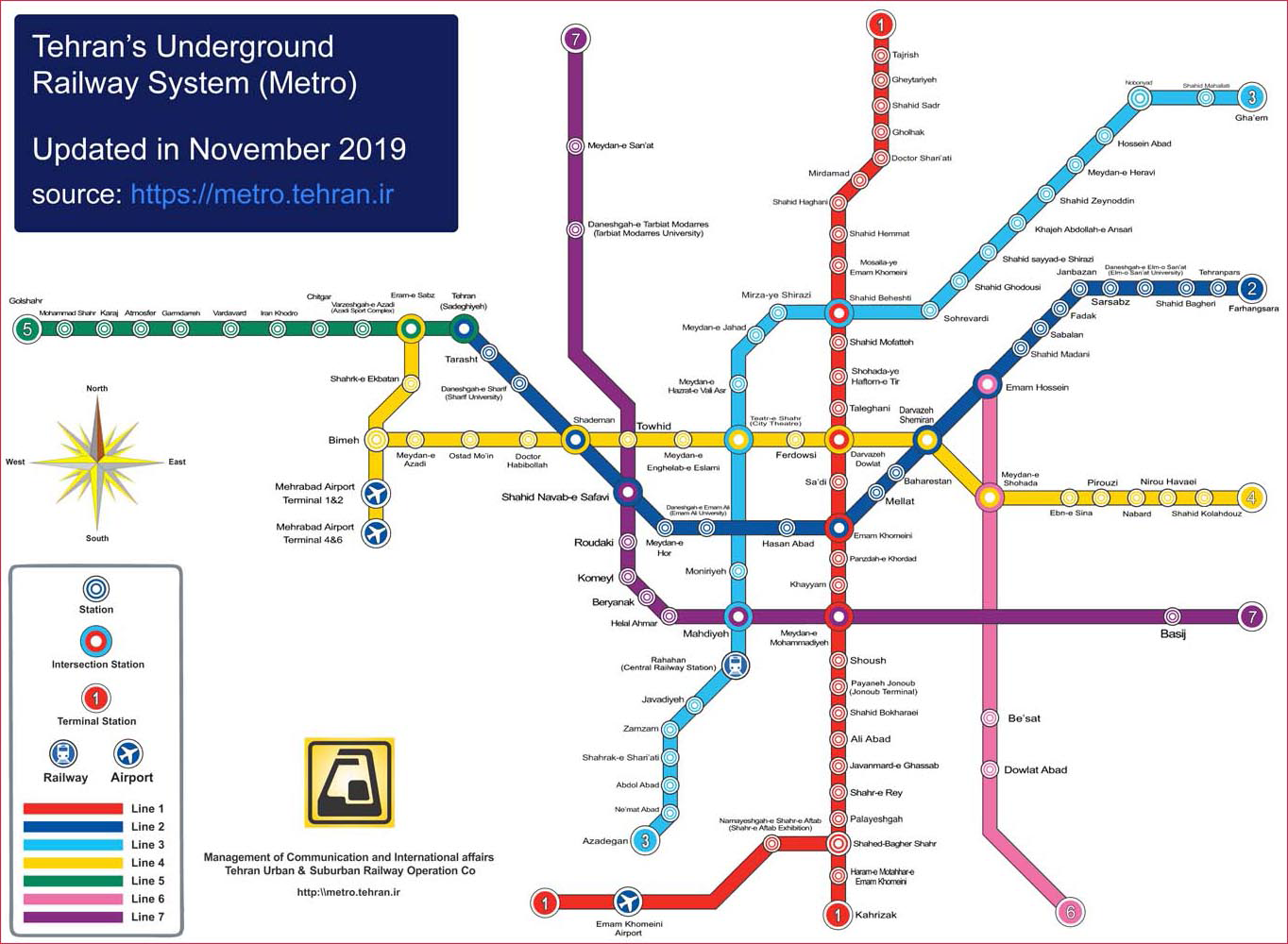 To move from the IKIA to the Faculty by Metro, you have to enter the "Emam Khomeini Airport" Station, located immediately by the exit of the IKIA, and take the following route:

Important note: The Tehran Metro is generally working from 5:30 a.m. to 10:30 p.m. However, the start and end working time of the Imam Khomeini Station is 06:50 a.m. and 08:10 p.m. Therefore, if you arrive at the airport outside this time range, you can use the IKIA Taxi Service, actively working day and night. More information about Airport Taxi is provided below.

If you are visiting MA from inside Iran

If you are currently inside Iran and intend to visit our campus from any city, you must first move to Tehran. Depending on the transport vehicle you use, the following possible routes are available to get to the Faculty.

In what follows, information is provided on the available transport options for you to get to Tehran and then to the Faculty of Theology and Islamic Studies.

Getting to Tehran by plane

If you choose to travel to Tehran by aeroplane, you will arrive at Mehrabad Airport, located in West Tehran, regardless of the city you move from. Like the IKIA, you are suggested using one of the following transport methods: Metro or Taxi. As the Mehrabad Airport is located near the campus, our first suggestion is the Airport Taxi. Otherwise, the Metro is also available to get to MA.

In the Mehrabad Airport, there are offices where you can take a taxi to different parts of Tehran. You need not worry as the Taxis work day and night, and there are standard rates applied for all passengers. It should take about 20 minutes to arrive at the MA by taxi. 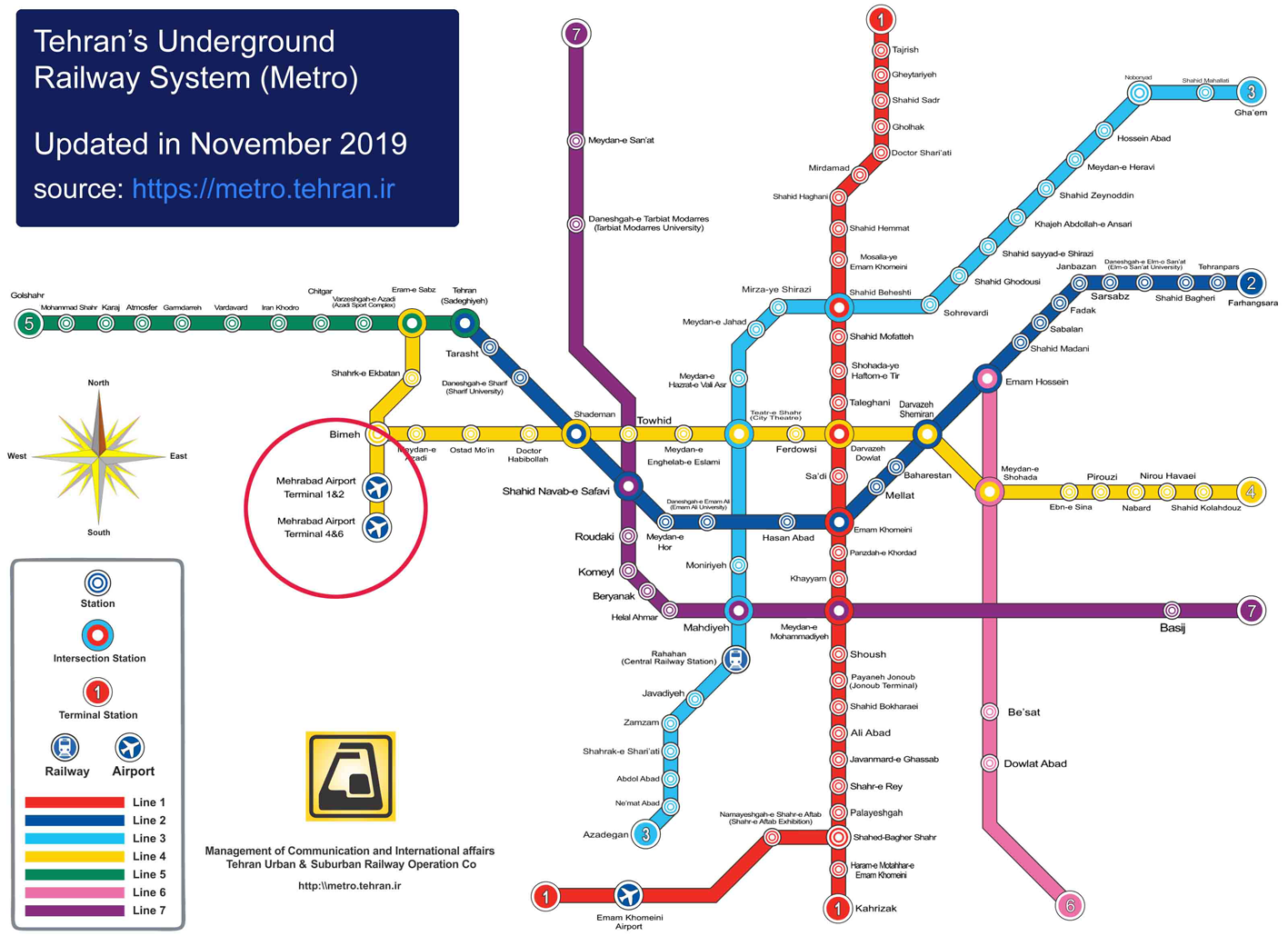 Once you have entered the underground station named "Mehrabad Airport", you must follow the signs to get to the boarding area. After boarding the Metro, you should be careful to get off in the immediate next station, named "Bimeh", to change trains.

Then, in the Bimeh Station, you should follow the signs and find the line 4 direction terminating in the "Shahid Kolahdouz" Station. Having boarded, you should get off in the immediate next station named "Meydan-e Azadi" Station. In this station, you have to exit the underground. Then, as explained above, from the Azadi Square terminal, you have to find the taxi line moving to Dehkade-ye Olampik. The taxis in this line take you directly to the Campus.

A snapshot of the route is provided below:

Getting to Tehran by Train

To use Metro, in Tehran Railway Station you have to enter the underground and follow the signs to enter the Line 3 direction terminating in the "Gha'em Station". Then, you have to get off at "Teatr-e Shahr" Station and change trains according to the signs. You have to enter line 4 terminating in "Eram-e Sabz" Station, get off in the Station named "Meydan-e Azadi", and proceed with the same instruction provided above.

Railway Taxi is also available in Tehran's Railway Station. Official Taxi Cars in Iran are in yellow or green colours.

Getting to Tehran by Bus

As the Beihaghi / Arzhantin and the Sharq Terminals do not have any metro stations, you are suggested to use the official yellow/green Taxis to get to the Faulty. You are also advised to keep a snapshot of the Faculty's address in Persian and provide it to Taxi drivers if they do not know English. The MA campus address in Persian is available below: 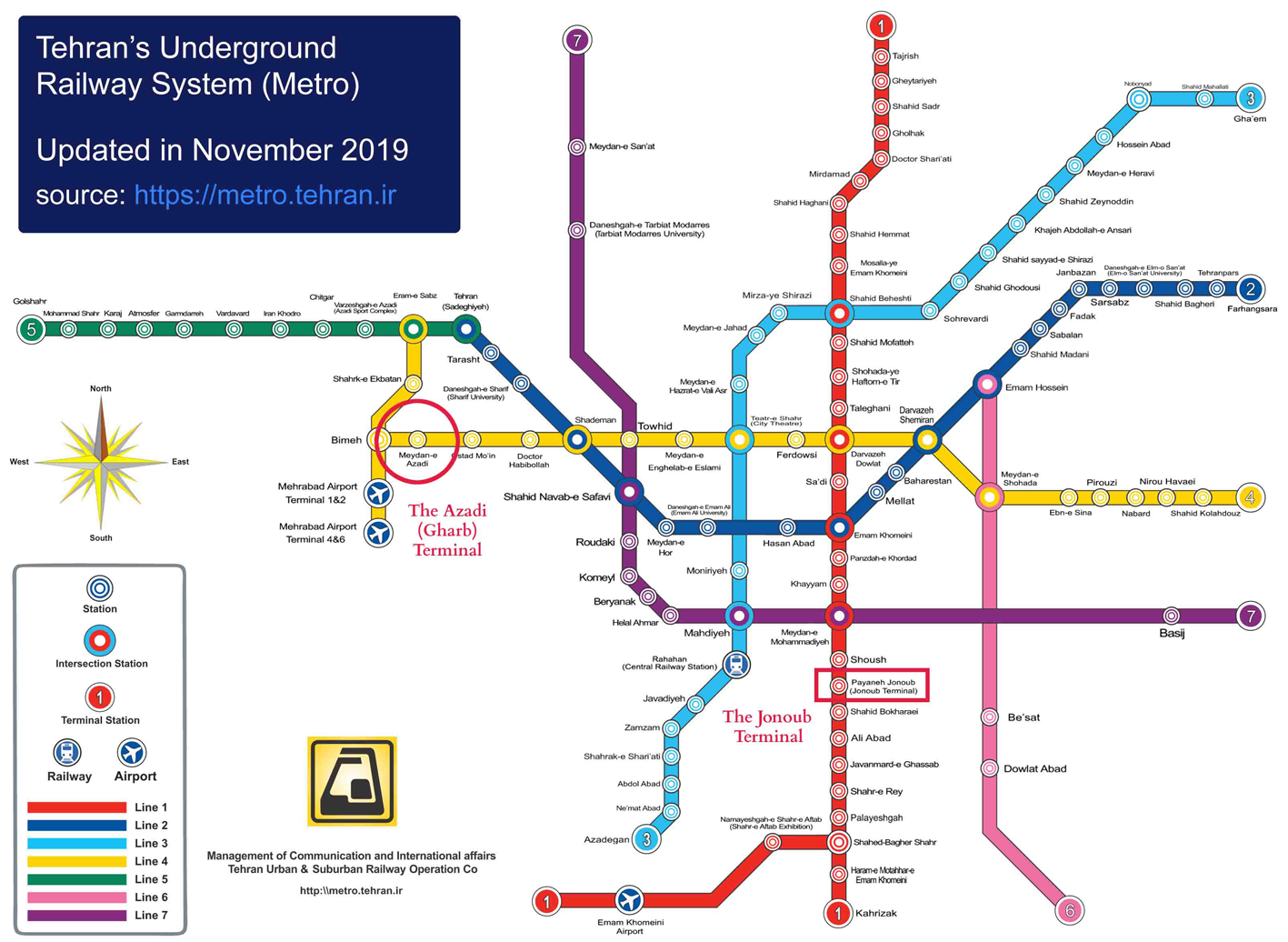