1st Symposium of Intl. Relations Directors in Iran and Spain

The first Symposium of Vice-Rectors and Director of International Relations at Iranian and Spanish Universities was organized online by Allameh Tabataba'i University (ATU) on 3 February 2021.

In the first Symposium of Vice-Rectors and Director of International Relations at Iranian and Spanish Universities, held online by Allameh Tabataba'i University (ATU) on 3 February 2021, International-Relations officials from 8 Iranian and 8 Spanish universities, together with representatives from the Iranian and Spanish embassies in the two countries and the Iranian Ministry of Science, Research, and Technology participated and discussed possible grounds for their academic and research cooperation.
At the opening of the session, Professor Hossein Salimi, ATU President noted that the two countries have not had serious conflicts and wars throughout history and, despite their geographical distance, they have had close cultural relations. Salimi said, "when the Ministry of Science appointed ATU as the focal point for the expansion of academic relations between Iran and Spain, we knew we'd have a simple and difficult task; simple since both sides were quite eager for the relations, and difficult as the connection had been fragmented for a while." Salimi hoped, in the end, that owing to the efforts made by the "Khayyam Centre for Iranian Studies" as the bridge between Iranian and Spanish universities, we will experience deeper and more dynamic relations.

HE, Mr Luis Philippe Fernandez de la Pena, the Spanish Ambassador to Iran, then expressed his satisfaction with attending the session and appreciated the organizers, noting that Dr Najmeh Shobiri, as a unique Hispanist, has tried for many years to facilitate the literary and cultural exchanges between Iran and Spain. The Ambassador then added that "we hope we might find the conditions in the international arena, so we can deepen our relations, because there is a large potential for further cooperation and relations between Iran and Spain."

Then, HE, Mr Hassan Qashqavi, Ambassador of Iran to Spain thanked Dr Shobiri for coordinating the session and noted that both the King of Spain and the President of IR Iran have emphasized the expansion of academic relations and, in this respect, measures have been made in collaboration with Allameh Tabataba'i University. Mr Qashqavi then added that "we are seeking for further academic cooperation in the fields of Political Science, International Relations, Linguistics, Humanities, Environment, and Plant Genetics."

As the fourth speaker in the symposium, Dr Abdolhamid Alizadeh, a representative from the Iranian MSRT then thanked ATU for holding the symposium and added that the "Ministry of Science has established committees in top Iranian universities to strengthen international academic cooperation. The present symposium is also a product of the same support policies and the activities conducted by Allameh Tabataba'i University in academic relations with Spanish universities. We are thrilled to see it and hereby declare the Ministry of Science's full support for such cooperation."

The representatives spoke about the history of their cooperation with Iranian and Spanish universities and expressed their willingness to expand cooperation in the following areas:
1. Exchange of professors and students;
2. Research opportunities (students) and sabbaticals (academic staff);
3. Joint PhD and postdoctoral degree programmes;
4 Joint academic projects.

At the end of the session, Dr Mandana Tishehyar, Director of International Academic Cooperation at ATU, proposed the signing of a Memorandum of Understanding on academic cooperation between the participants and mentioned, "It seems that, given the great potentials for cooperation, we'd better think of the establishment of an Network of Iranian and Spanish universities and invite further HE institutes and universities to participate in the program. The network could mainly be managed by the "Khayyam Centre for Iranian Studies" located at University of Nabrija while there is also a capacity to open representative offices for Spanish universities in Iranian universities. Today we heard from the esteemed ambassadors of the two countries about their willingness to support our academic cooperation. MSRT representative also said that the Ministry will unwaveringly support the collaborations. Accordingly, it is perhaps the best moment in the history of the academic relations of the two countries to launch a joint network for academic cooperation in various fields." 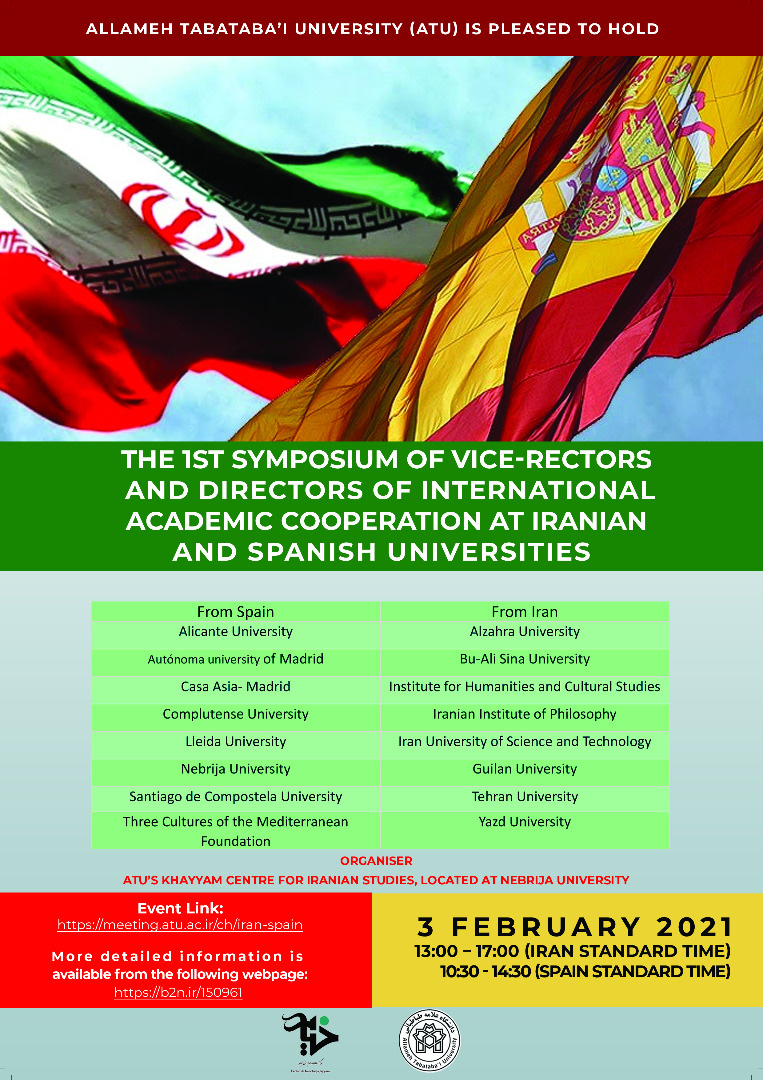