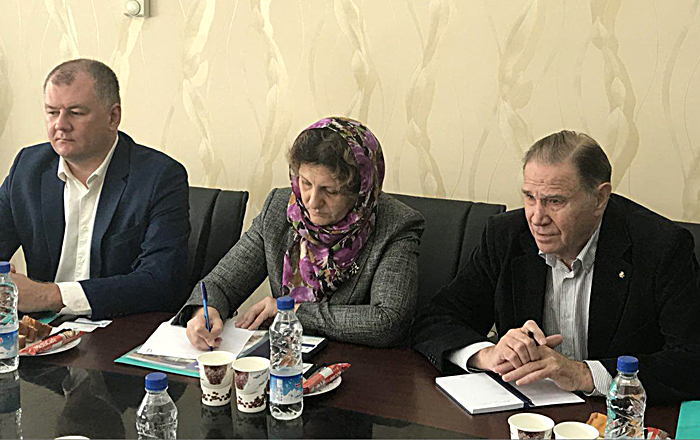 A delegation of officials from Moscow State Linguistic University (MSLU) had a visit to ATU and negotiated the possibility of expanding collaborations therewith.

A delegation of officials from Moscow State Linguistic University (MSLU) had a visit to ATU and negotiated the possibility of expanding collaborations therewith.

A Delegation of officials from MSLU, including Dr Innara Guseynova, Vice-Rector; Prof. Alexander Polischuk,, Director of the Centre for Persian Culture and Language; and Dr Roman Silantyev, faculty member at Linguistics Department and one of the renowned Russian Islamic Scholars had a visit to ATU Central Campus and negotiated the possibilities of enhancing the international academic cooperation with ATU representatives, including Dr Nader Nematollahi, Vice-President for Education; Dr Mojtaba Monshizadeh, and Dr Ali Reza Manouchehrian, faculty members at ATU Departments of Linguistics and Persian Literature; Dr Mandana Tishehyar, Director of International Academic Cooperation; and Dr Majidreza Momeni, Head of the Office for Developing International Academic Cooperation; and Dr Saeed Shokouhi, faculty member at the Department of Regional Studies, ECO College of Insurance.

Dr Nader Nematollahi, first, introduced the host delegation and pointed to the numerous memorandums of understanding signed with Russian academia. He suggested the aim of the session to be negotiating on the methods for implementation of MoUs signed in 2015. Dr Guseynova then appreciated ATU's hospitality and introduced the Russian delegation. She pointed to the cooperation between ATU and MSLU in the form of student and staff exchange and thanked the efforts of Dr Shafaghi, faculty member at ATU Russian Department, while appealing for the continuation and expansion of the collaborations.

Dr Tishehyar then expressed her gratitude to Dr Makarenko Vadim, MSLU faculty member, who had taught the last term in ATU and evaluated the level of MSLU students sent to ATU as being satisfactory. Dr Monshizadeh continued with the academic activities in his department and the plans for the establishment of Persian Language and Teaching Persian programmes. He considered the establishment of the Centre for Teaching Persian to Non-Persian Speakers in ATU as a good starting point in the implementation of the raised suggestions. 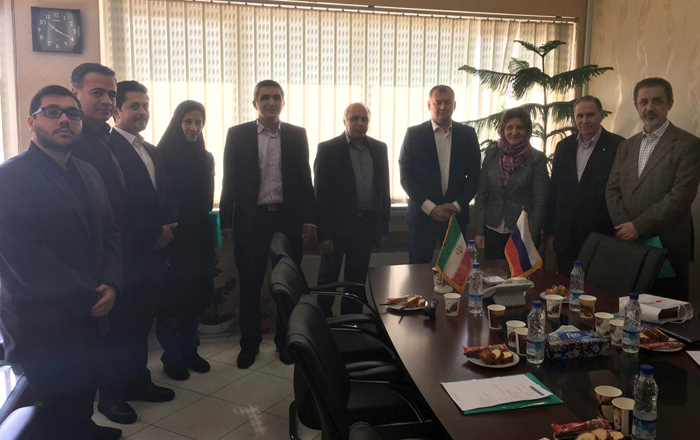 Dr Momeni, afterwards, expressed some points regarding ATU plans for establishing joint/double degree programmes in the areas of Linguistics, Persian Language, and Central Asian and Caucasus Studies. He pointed to the structural limitations in Russian Ministry of Science concerning the establishment of joint degree programmes, and reminded the participants of the success stories in this regard, requesting the two universities to concentrate on doing it. Saying that the Central Asian and Caucasus Studies programme is currently being taught fully in English, Dr Momeni insisted on the possibility of starting with the establishment of the joint programme in this area.

The session continued with Dr Shokouhi suggesting the cooperation to start with thee following activities: holding joint degree programmes in the field of Central Asian and Caucasus Studies, holding short-term courses taught by professors of the two institutes, and mutual exchange of students in the fields of Iranian and Russian Studies. Dr Manouchehrian then pointed to the important positions of Persian and Russian languages and emphasised the two institutes to establish a Joint Academy of Translation, training translators and interpreters for preserving the valuable literary canons.

MSLU's Vice-Rector then pointed to the MoU signed by the two institutes and mentioned that 39 languages are currently being taught in MSLU, with Persian having an important position. He then expressed MSLU's willingness to exchange professors and students with ATU in the fields of Persian and Russian languages, as well as the establishment of a Master's Programme in the Theories of Translation and holding video-conferences in Persian, English and Russian. Dr Nematollahi, in the end, concluded the session clarifying ATU policies in its short and long-term collaborations regarding the exchange of professors and students, holding video-conferences, holding scientific sessions, and establishing joint degree programmes. Regarding the establishment of the new joint / double degrees in Central Asian and Caucasus Studies and Linguistics, he pointed to the limited time remaining to enter these programmes in the list of programmes published annually by Sanjesh Organisation and insisted on the parties to speed up their activities in this regard.

Dr Galyani wins the first prize at AM20

First issue of Synergies Iran Journal out in French