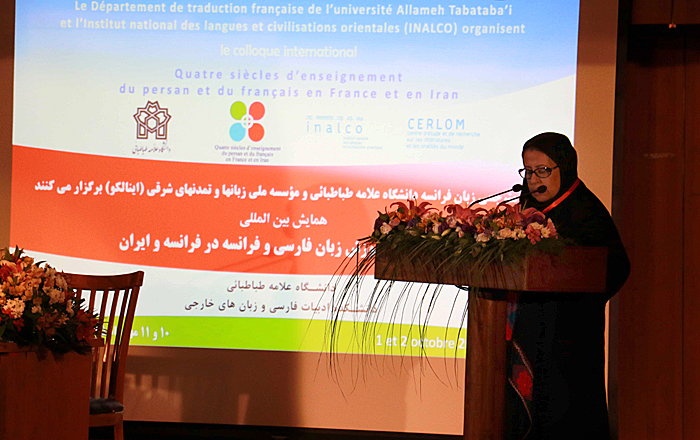 ATU Faculty of Persian Literature and Foreign Languages (PLFL) held an International Conference on "Four Centuries of Teaching Persian and French in France and Iran" on 1 and 2 October, 2016.

This conference, organized through the efforts of ATU's French Department and in partnership with INALCO, with the academic cooperation of CERLOM, with the aim of enhancing academic and cultural exchanges among Iranian and French scientific, research and academic institutions, and providing students, researchers and professors with a space to share their views on four centuries of Persian and French Languages taught in France and Iran. In this event, scholars from French also participated, including Fayza el-Qasen, Dean of the School of Translators and Interpretors, Paris-Sorbonne University; faculty member and head of the Education Department of the Frenche Comté University; Head of the Language Teaching Centre (CLA); Leila Anwar, faculty member at INALCO and translator of Mowlana Rumis works into French; Dr Amir Maghani, faculty member from INALCO; and other eminent professors and researchers from French academic institutes.

The conference opened with Dr Ali Asghar Mosleh, Dean of ATU's PLFL Faculty delivering a speech on the joint effects of French and Iranian philosophers on the cultures and thinking of these two countries. Then, the French Cultural Attaché ti Ian, Mr Jamel Oubechou talked about the importance of culture and language in the formation of relations among nations. The conference continued around four main topics of translation, language,language teaching, and culture and literature, and more than 60 papers were presented by researchers from different countries.